Back To The Future Halloween Family Pictures

Back To The Future Halloween Family Pictures Is a genius idea for a group costume. Marty McFly and Jennifer would also make a great couples costume. 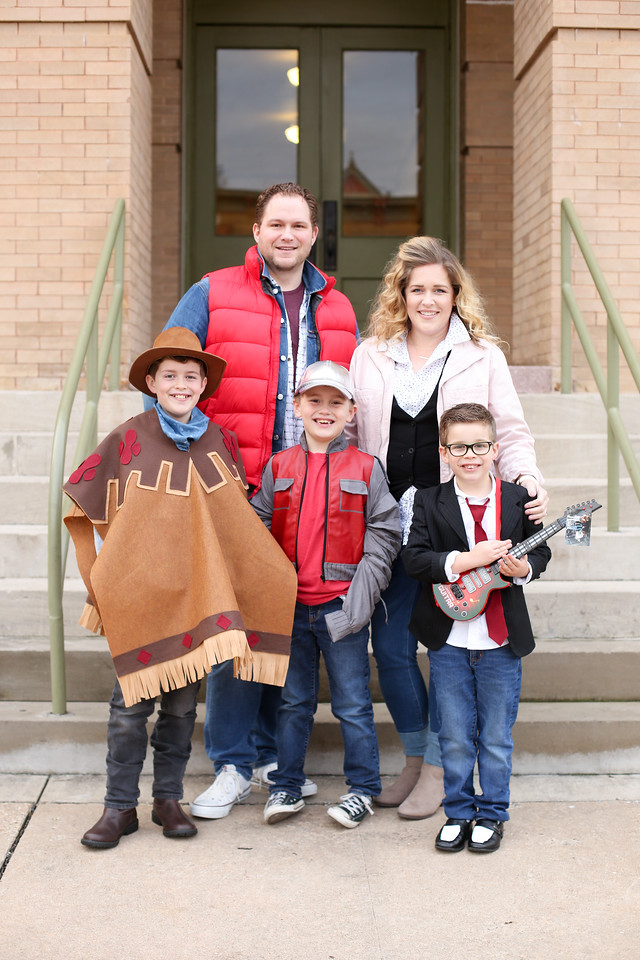 Finally the time came that I was able to pull together a family theme for Halloween!  One of our favorite trilogies to watch as a family is Back To The Future.  I grew up watching it on VHS tape that my mom taped off of HBO. 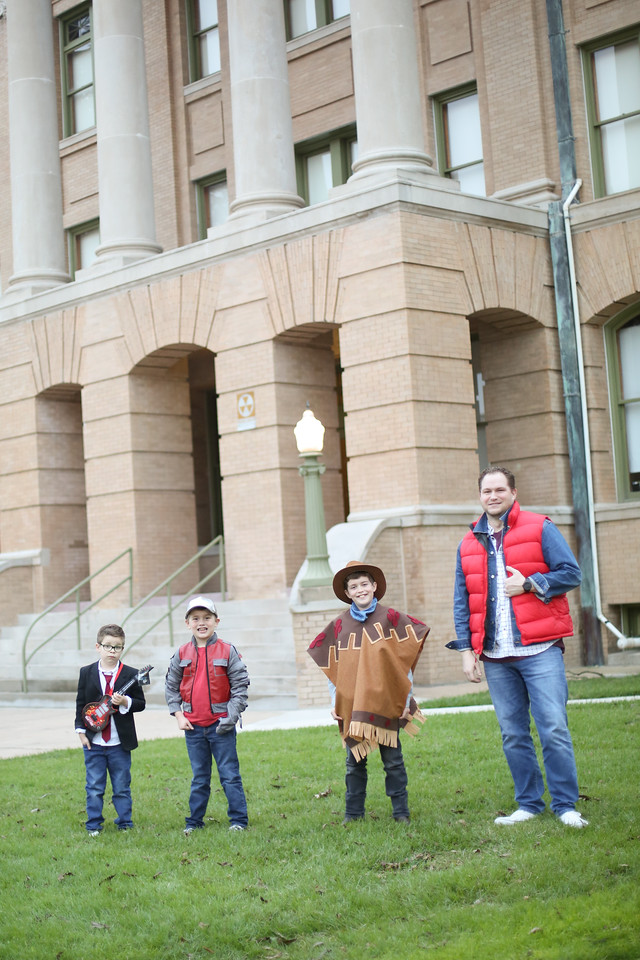 A few years back my dad was super obsessed with it and watched the first one frequently.  He passed on  the box DVD set to my oldest son soon after that because Liam had recently seen the first one and LOVED it.  That’s what sparked our family’s obsession with it. 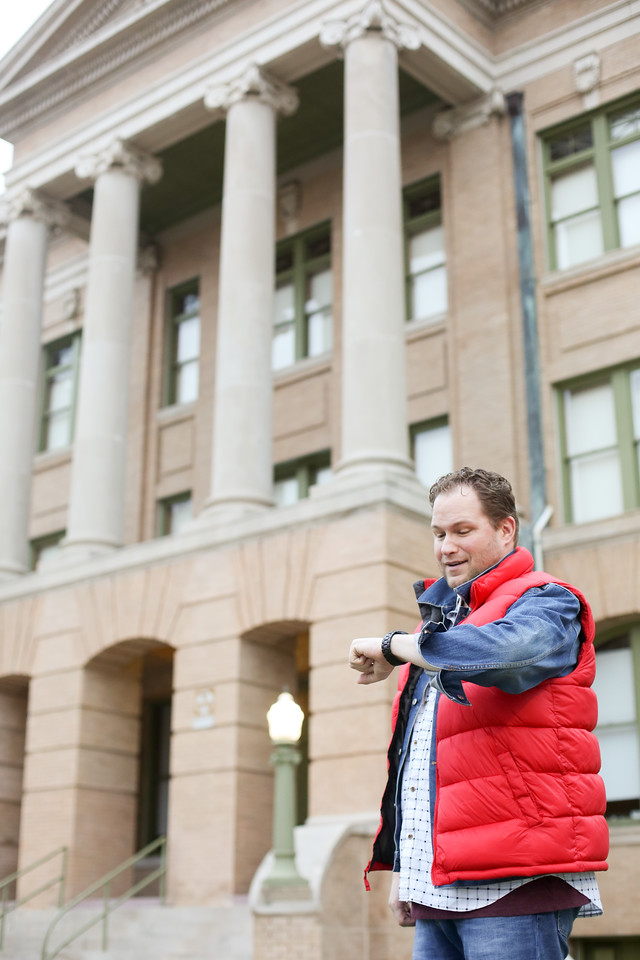 Some of my boys have a few of the lines memorized and even pretend they have their own Delorean with a Flux Capacitor.  It’s a fun adventure movie series that has turned into a classic! 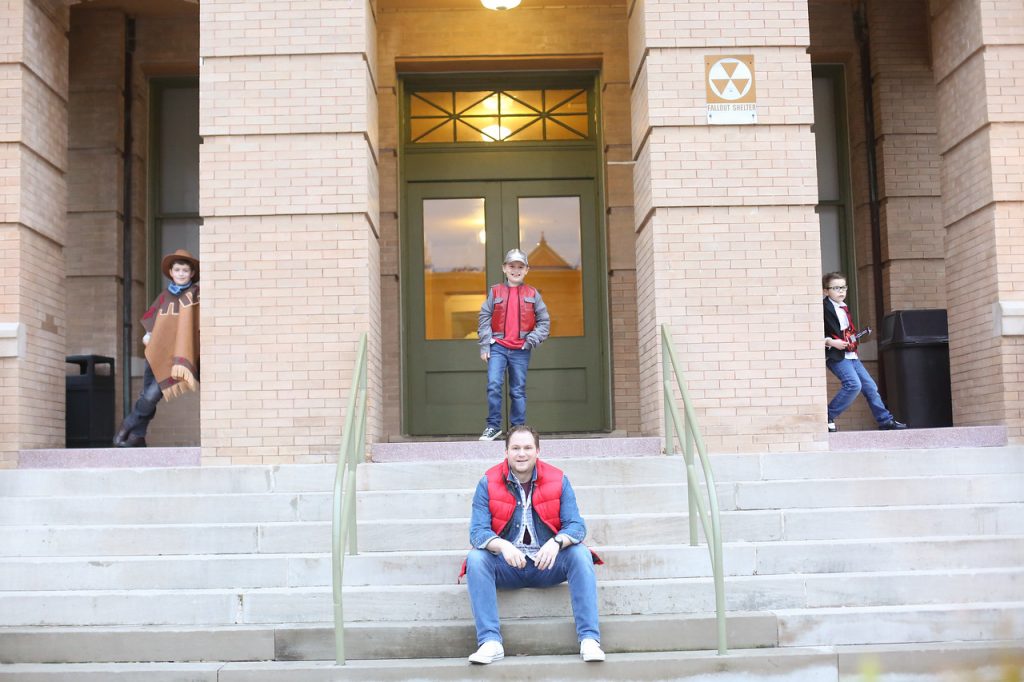 I carefully curated everyone’s costume by slowly scouring the internet for a few months and even hand making a few items of my own.  Here is the breakdown of who everyone is in case your not familiar with the movies.  We chose characters from all three movies. 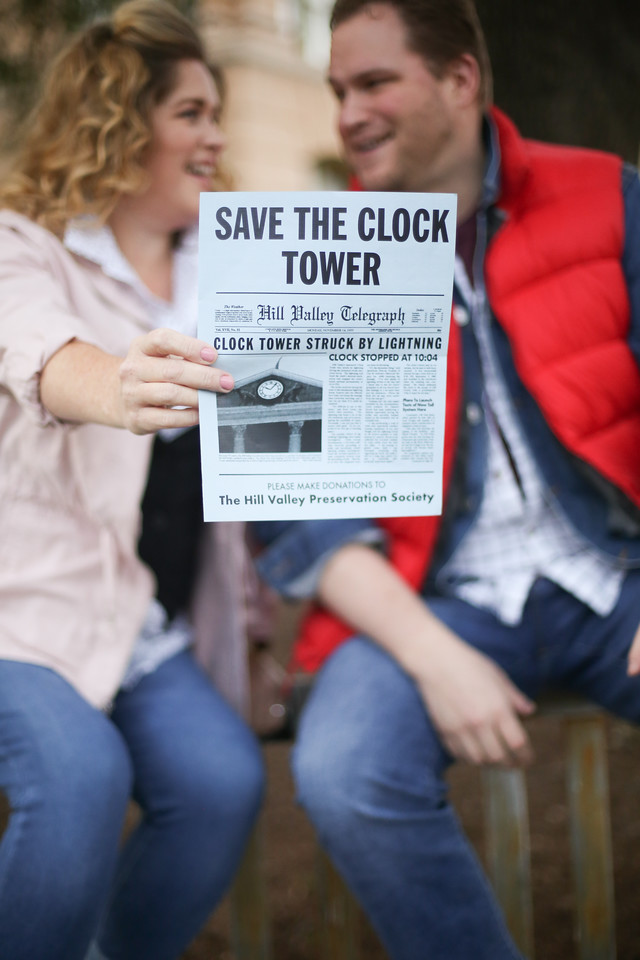 Back To The Future Marty McFly

My husband went as the classic Marty McFly.  Denim jacket, grid button up shirt and of course, the puffy vest.  He already owned the jean jacket from years before.  He wore regular jeans and donned his white Converse shoes.  Not the old school Nike ones like Michael J. Fox wore, but close enough.

It the iconic puffy vest I was most worried about finding.  Low and behold, Old Navy had a close enough one in color that worked.  I also found his Maroon t-shirt and grid button up shirt at Old Navy as well.  We opted out of finding black suspenders because you wouldn’t really be able to see them.

What I like about his costume is that everything we purchased he could separately wear every day.

I’ll tell you more about my outfit below.  First, I wanted to share that I paid close attention to detail when it came to the few props that we had  I found this Save The Clock Tower flyer off the internet and just printed it on some light blue scrapbook paper I had.  You can simply Google and find it yourself there. 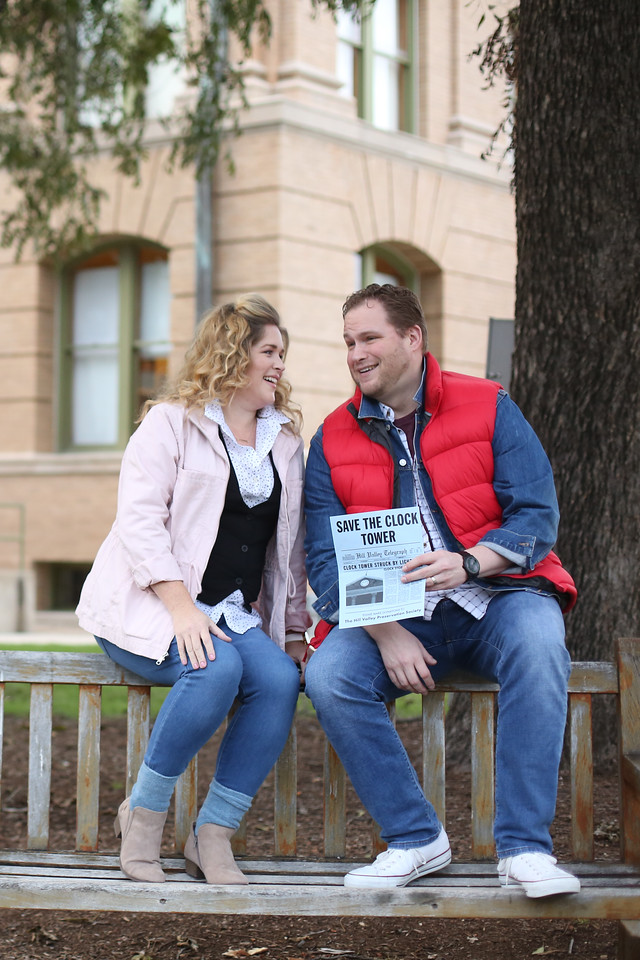 Another little detail that you might not notice, even though it’s the biggest one, is the building we used as our location for our shoot.  I wanted something that as similar to the town hall clock tower in the movie.  Georgetown, Texas was the closest thing we could find and it turned out perfectly! 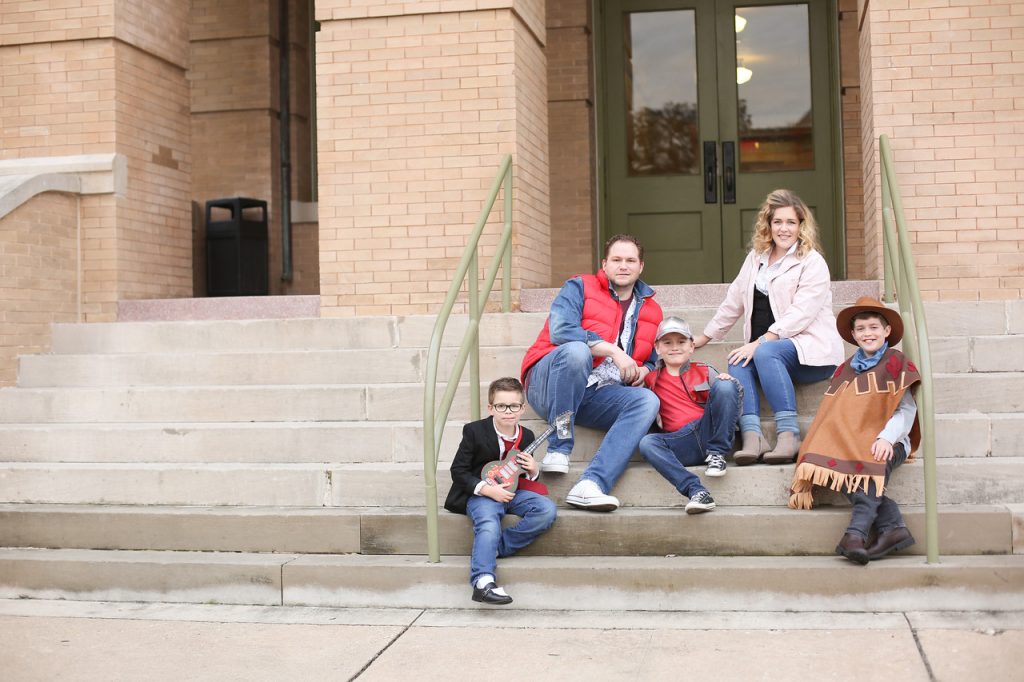 Back To The Future Under The Sea Dance

My youngest son was Marty McFly as Calvin Klein from the first movie.  I already had the suit jack and white shirt.  I purchased a mini guitar from Amazon and printed off a picture of Marty McFly’s disappearing siblings. 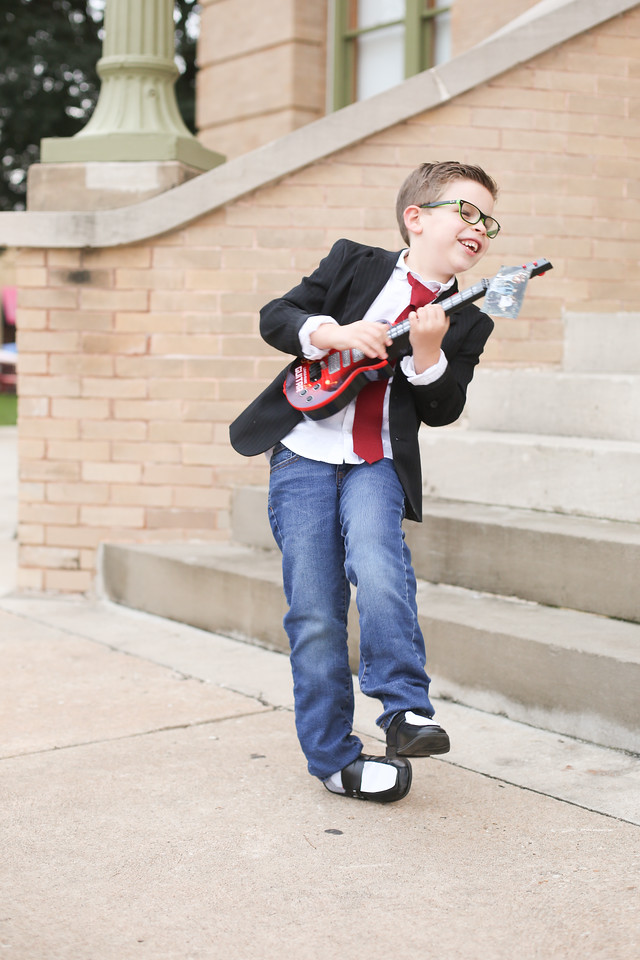 He also had black church shoes that I simply taped some white computer paper to to make it look like shoes from that era.  I had a hard time finding a child solid red tie so I made one from dark red felt.  There’s nothing you can’t create with felt and a glue gun! 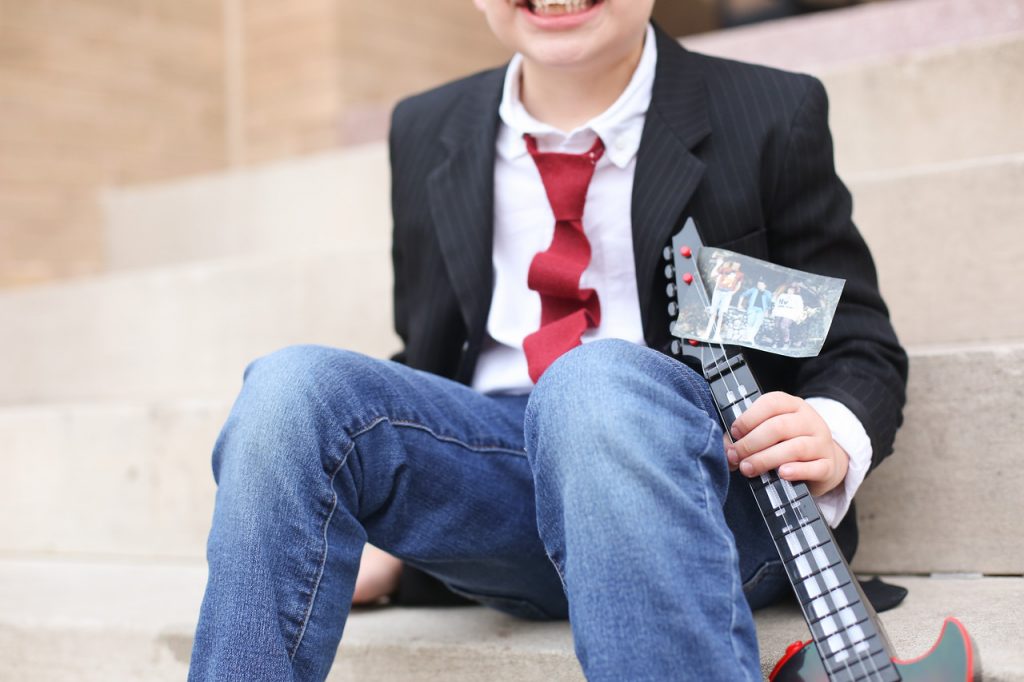 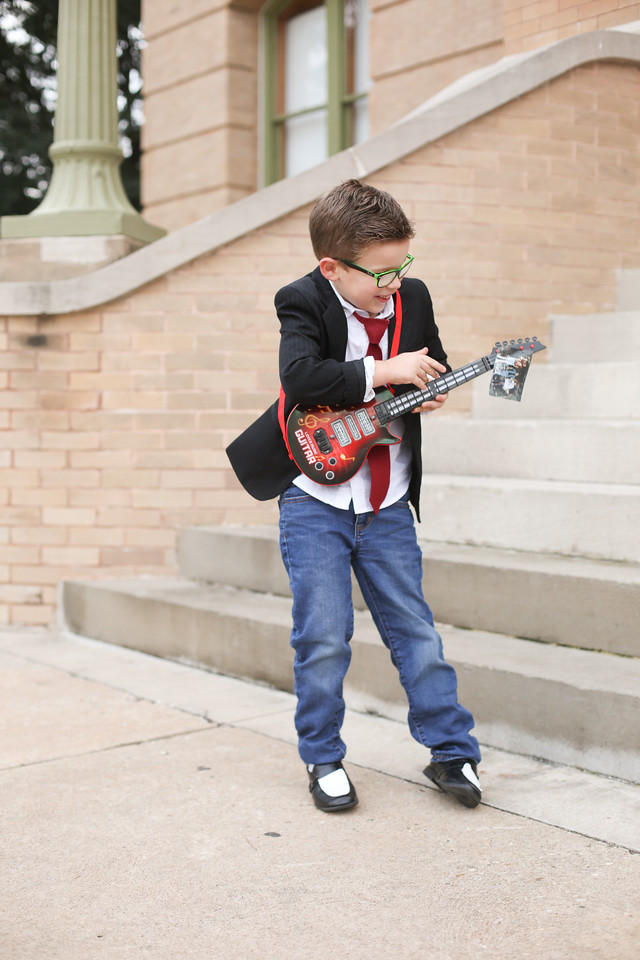 Back To The Future 2

I though I would have a tough time finding the jacket that Marty McFly wears as Marty McFly Junior when they go into the future.  I thought that I could possibly make up something that would resemble it, but it exhausted me just thinking about it. 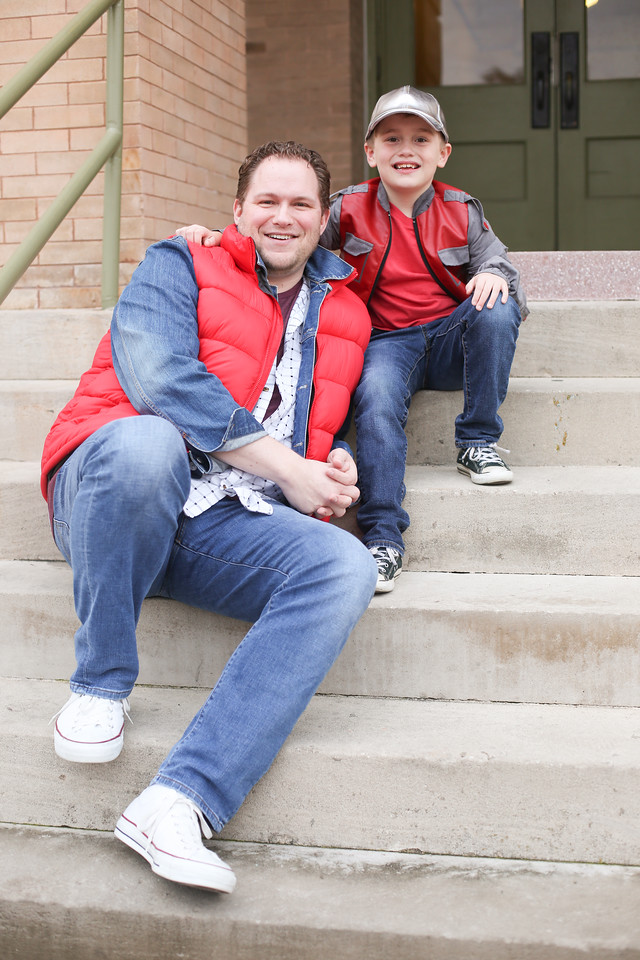 Low and behold I found one on the internet!  You seriously can find anything on the world wide web.  Since I already had spent a little too much on his jack I didn’t want to fork over the money for a replica of his multi colored hat in the film.  I found this silver one at Walmart for $3.00 and was satisfied with how it looked.

He also work regular jeans, but of course we had to pull out the pockets to match the character.  You can see it a little in some of the pictures. 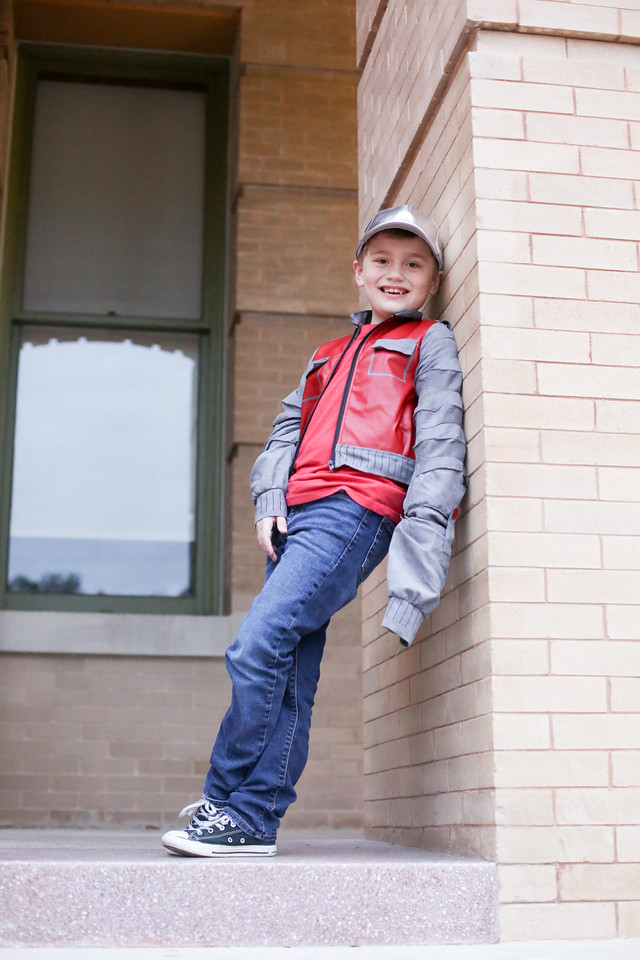 Back To The Future 3

My oldest son is the one that sparked it all.  He was determined to be Clint Eastwood.  Well, at least Marty McFly as Clint Eastwood.  I knew I would never find a kids poncho that looked exactly like the one in the movie so I was fine with making it.  I had made a little poncho for a school performance a few years prior so I knew it wasn’t too hard. 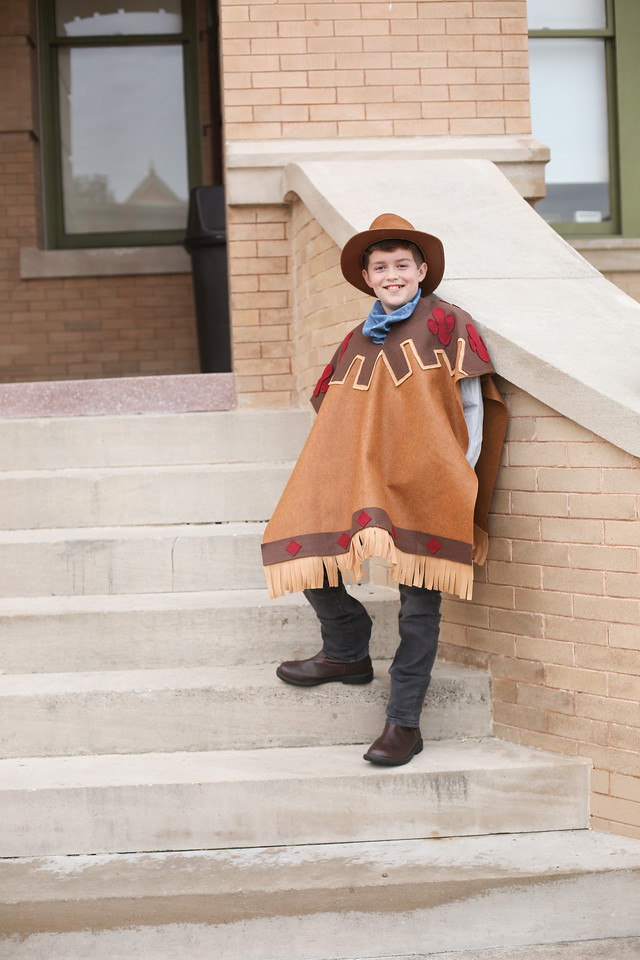 It’s all felt and hot glue!  We borrowed a hat from a friend and the boots I found at Walmart.  He wore simple black jeans and we had a stripped button up shirt that worked.  I also crafted him a faux stove pipe oven lid (like he had in the movie) from simple black art board.  If you’re a fan of the movie, you totally get why this little detail was important to include! 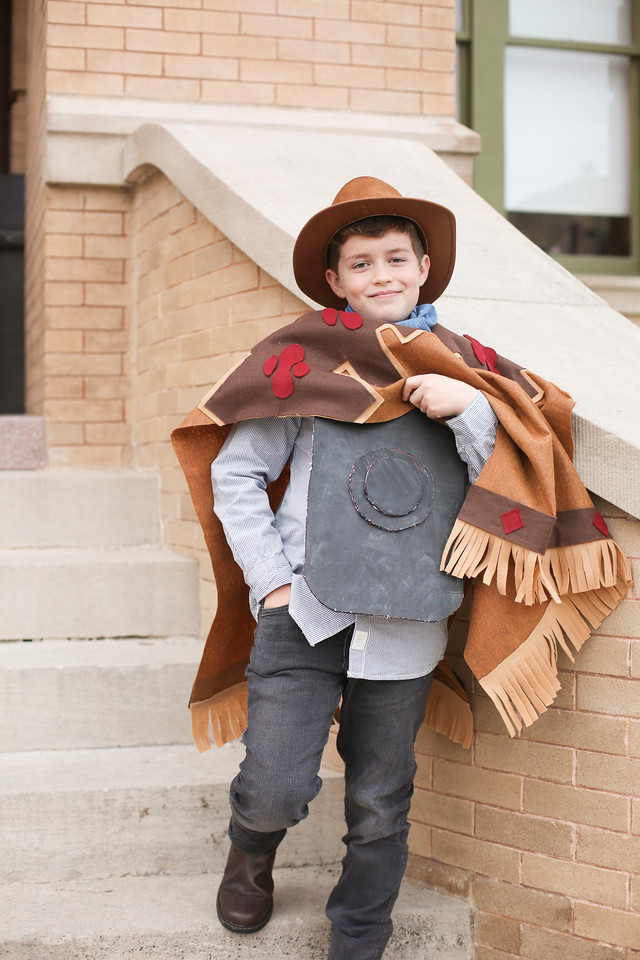 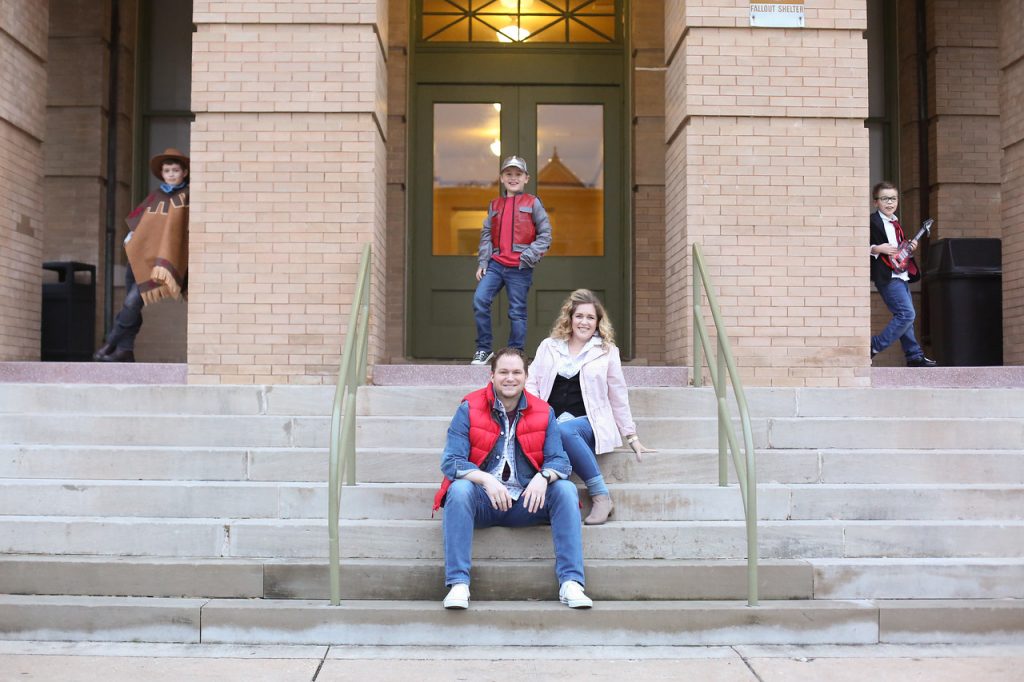 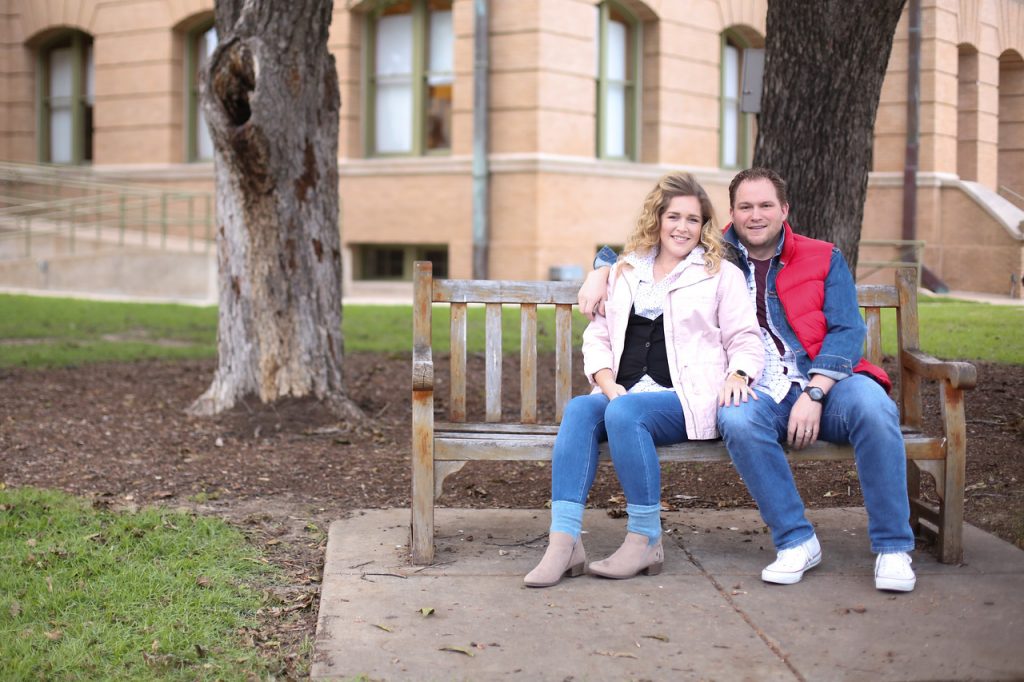 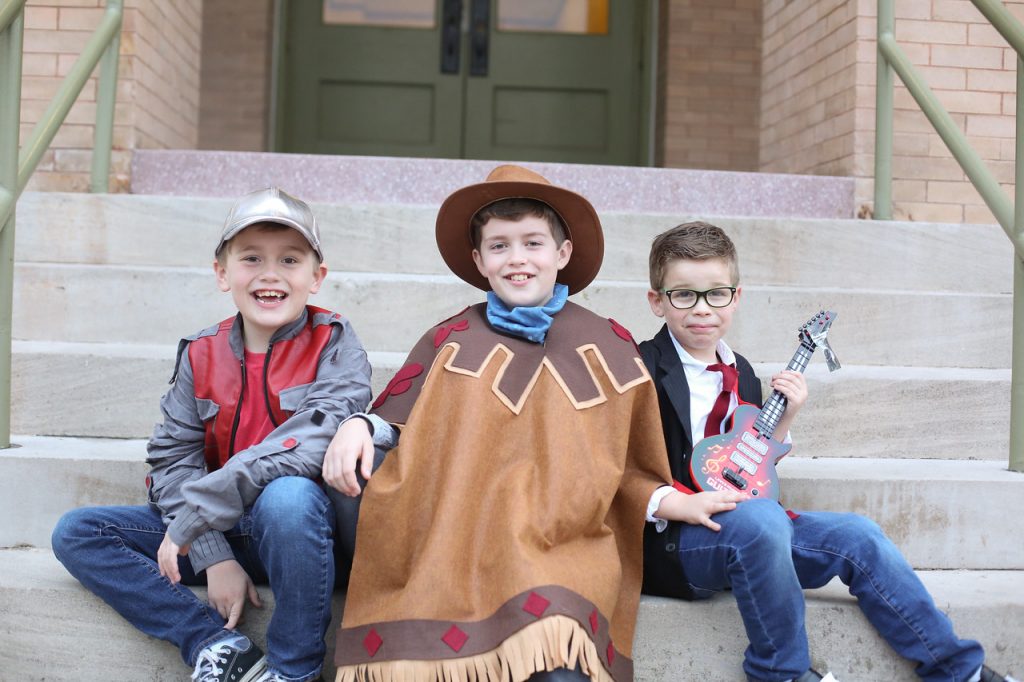 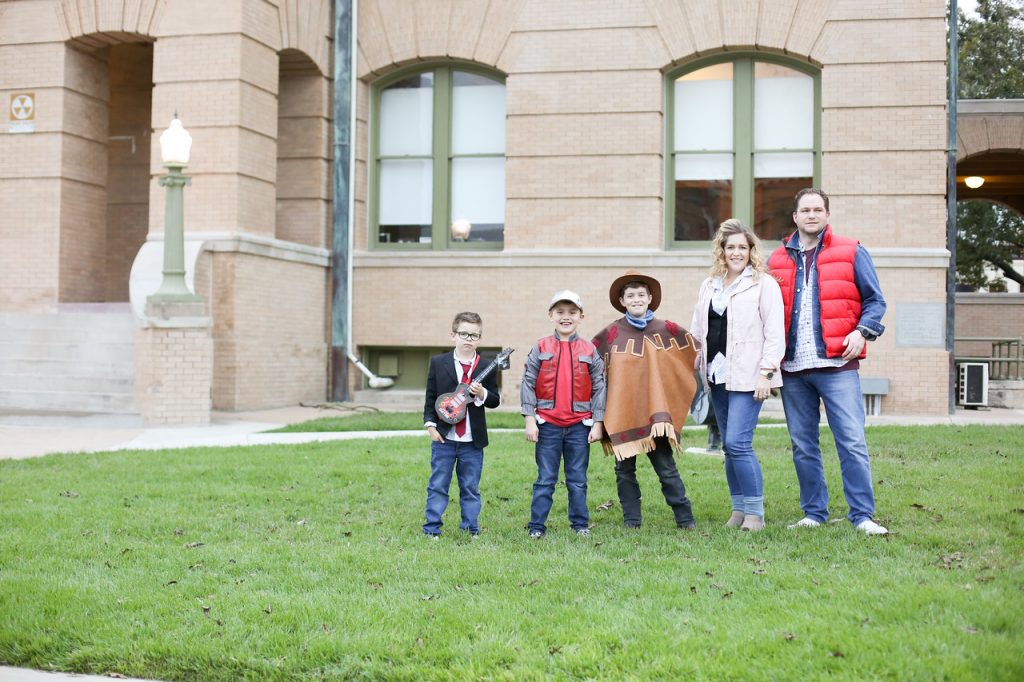 It was only natural that I dress like Marty’s girlfriend, Jennifer.  I toyed around with the idea with dressing like Lea Thompson’s character, but thought it would be a little weird since she is his mom after all! 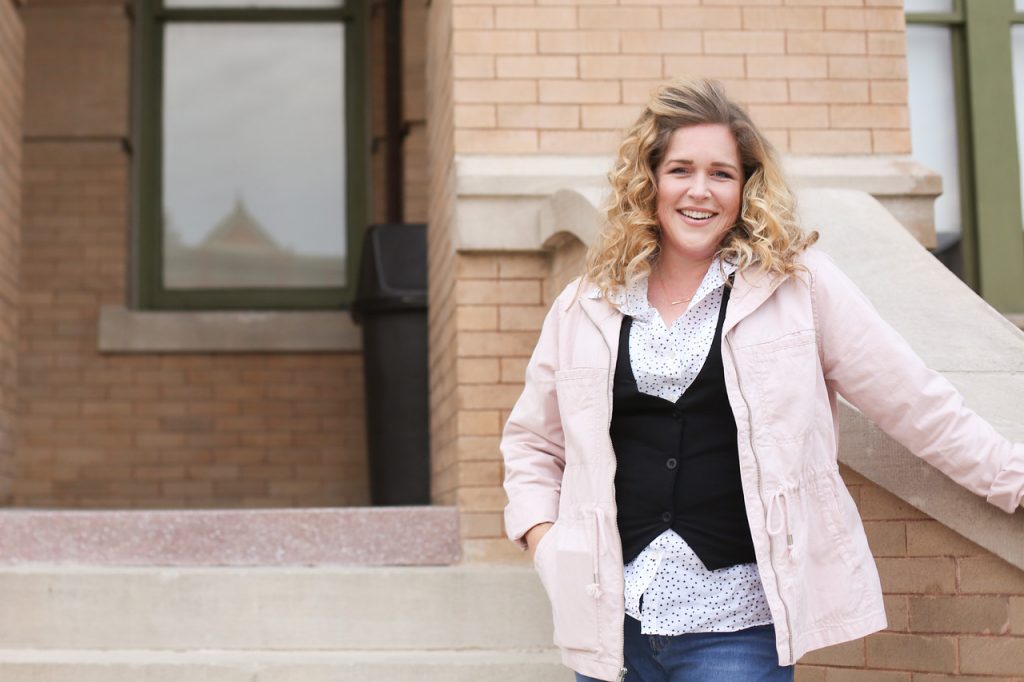 Now, typically when I see people dressing up as this character, they choose the second outfit she wears at the end of the first movie and then throughout the other two.  I wanted to do something a little different and use her outfit in her first scene as my inspiration.  Plus I new I’d never floral jeans to wear!

I found my button up shirt and pink jacket at Old Navy and purchased my black vest from Amazon.  I picked up some long light blue socks at target (that I wore over my jeans of course) and found these booties at Walmart last minute.

Of course I had to have super large and curly hair!  I loaded up on the hairspray!  It turned out better than I expected. 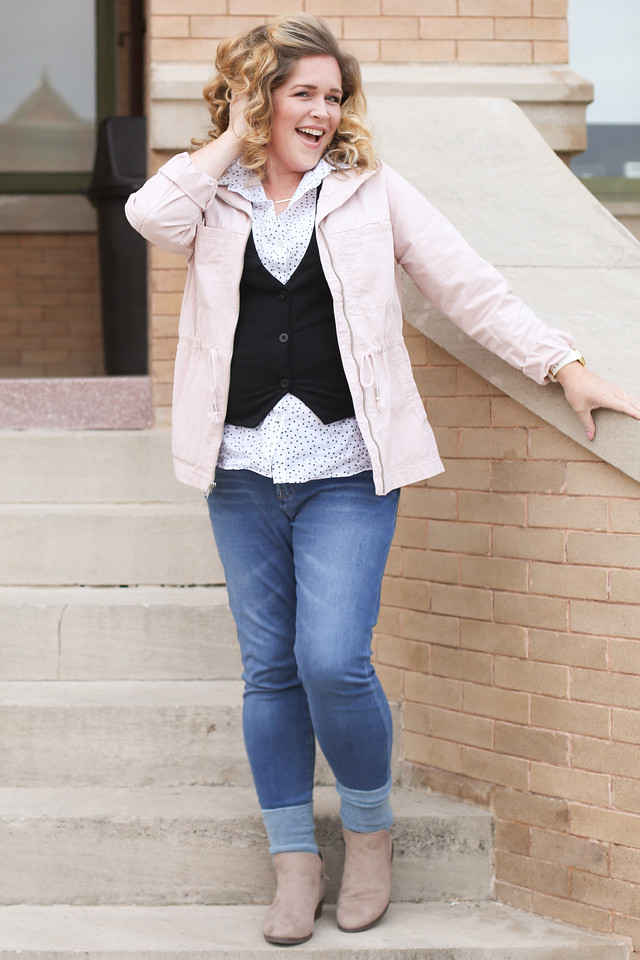 Once I pulled everyone’s costume together, I knew the moment had to immortalized in photos. We asked our friend Heather to snap the pictures and she did an incredible job!   She’s a fantastic photographer so I had no doubt they would exceed my expectations! 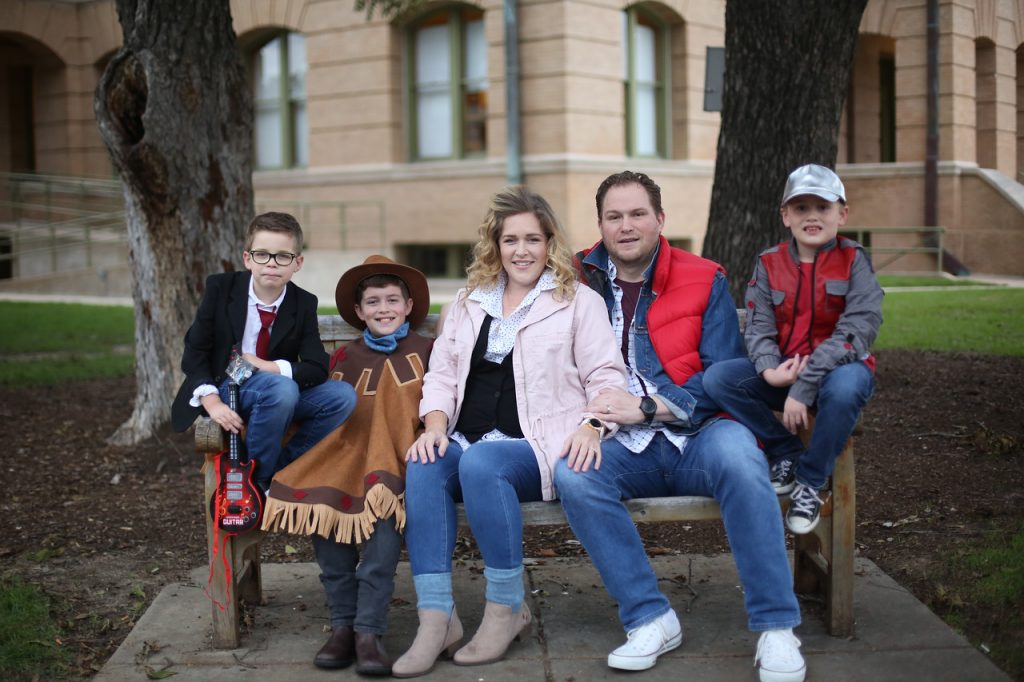 I hope you enjoyed this super long post with a million pictures!  We had a blast shooting this and will have even more fun wearing it to our Halloween festivities! 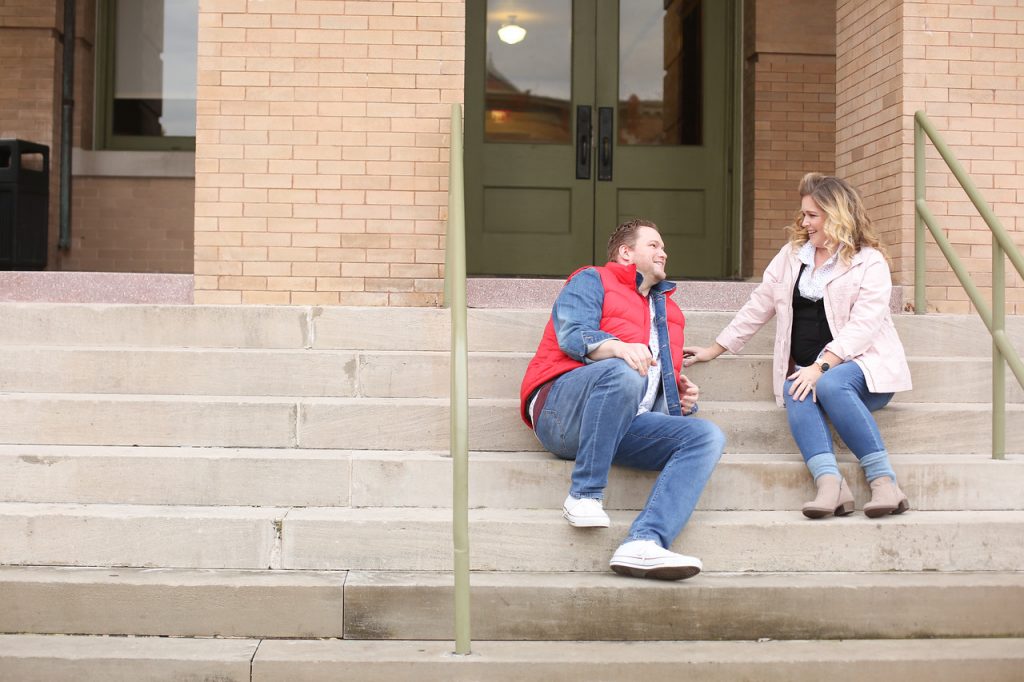 Have you ever done a family theme for Halloween Costumes?  Leave me a comment below and tell me what it was.  I’d love to know!

Speaking of fun things for Halloween, be sure to check out these Halloween articles!

How To Make Your Own Candy Eyes 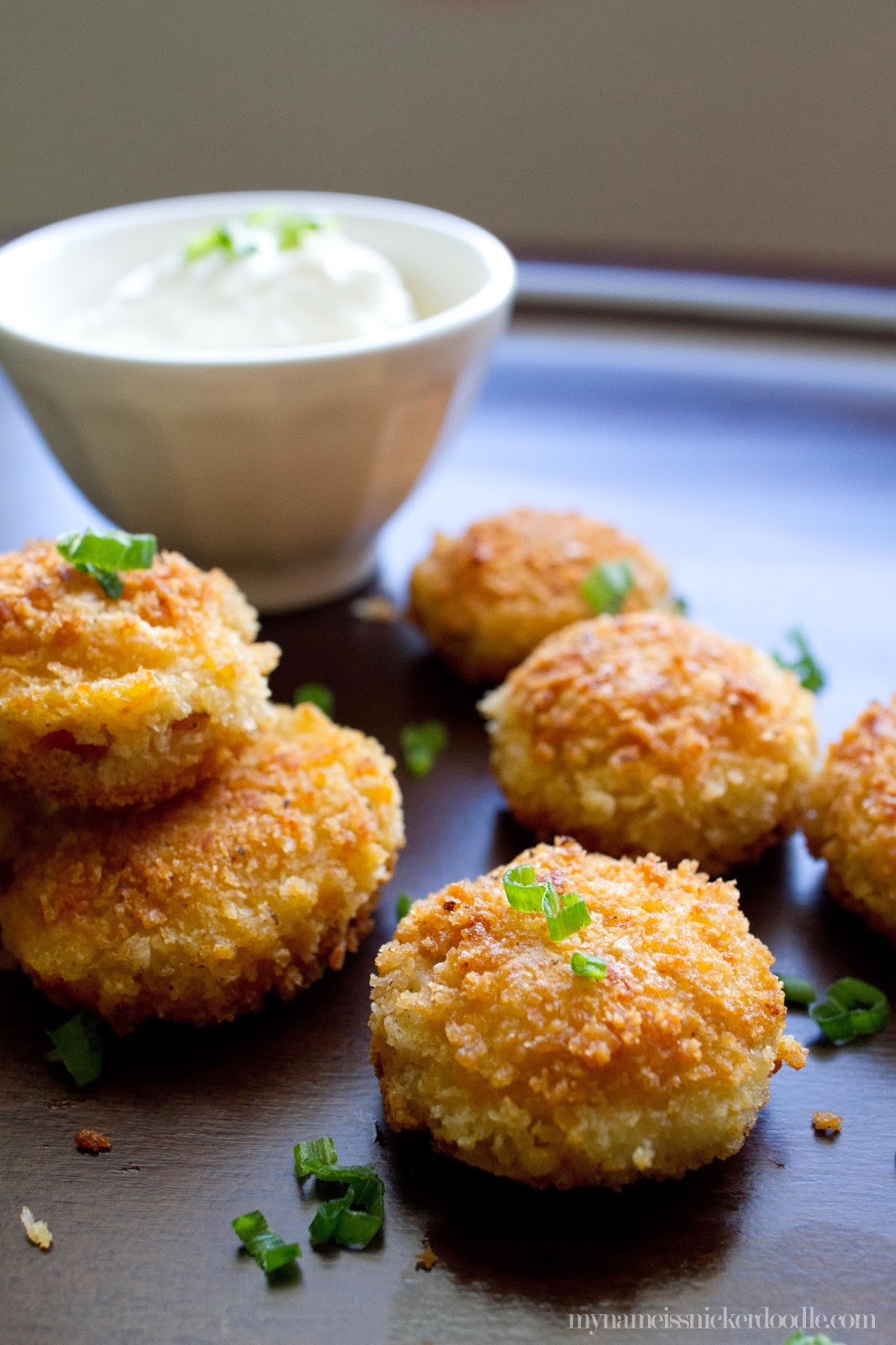 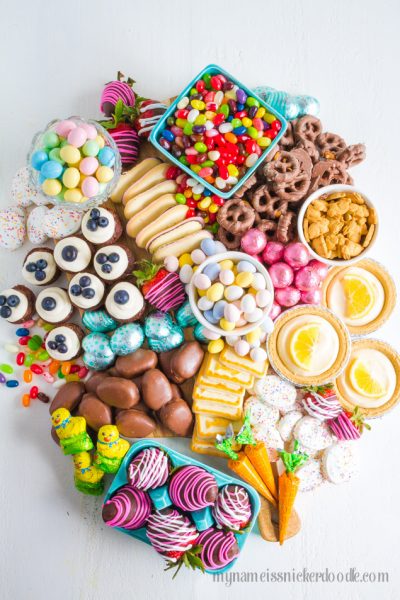 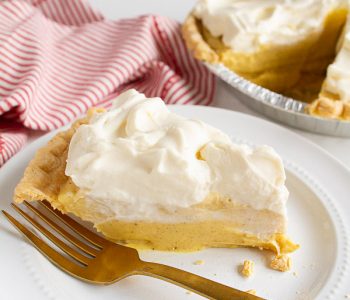