I have always wanted to throw (or attend) and outdoor dinner party.  I even have a dreamy picture of one I found on Pinterest that I actually pinned to my dream board that hangs in our bedroom.

If you are going to have an outdoor dinner party you have to go all out or else it just won’t be worth it.  My friend Amanda is one that is not afraid to go above and beyond when it comes to parties so I partnered up with her and her sister to plan the event. 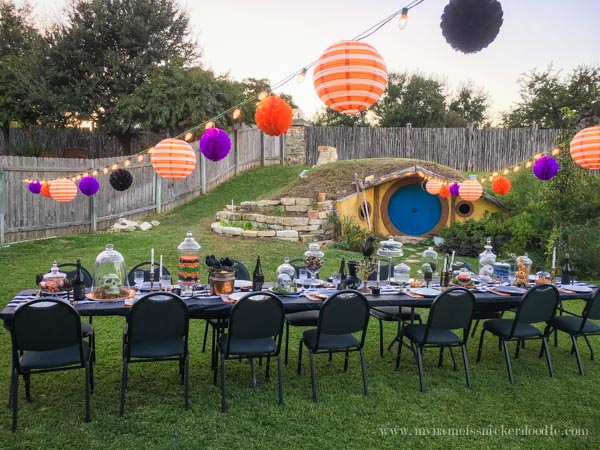 She is one of the friends that helped plan the kids Halloween party we had back HERE.  This time around we just wanted it be adults so we invited a few of our mutual friends. 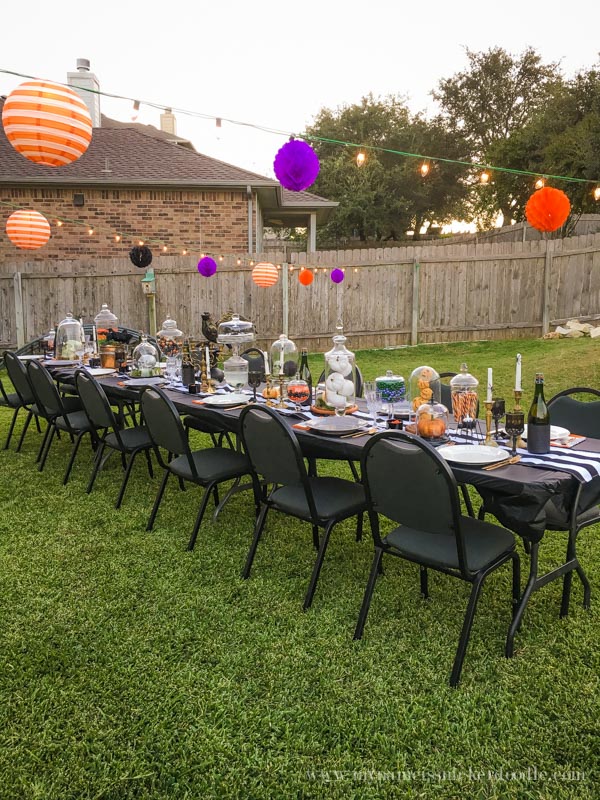 We had it in her back yard because it’s just super fabulous.  And yes, that is a hobbit hole that they built from scratch!  Cool, right?! 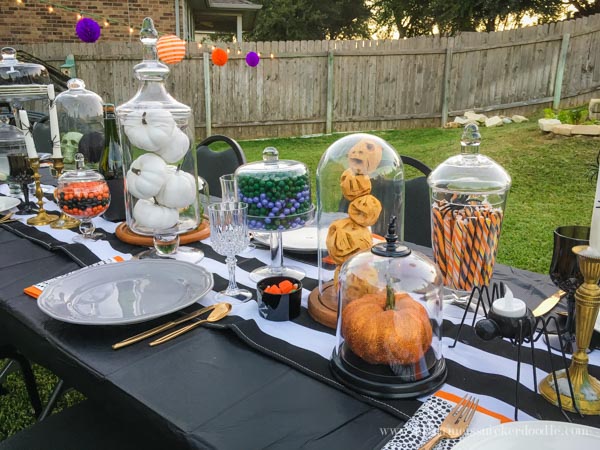 Between the three of us we pulled together 99% of the tablescape.  I think the only thing that was purchased was some moss. We all had glass apothecary jars and random decorations. 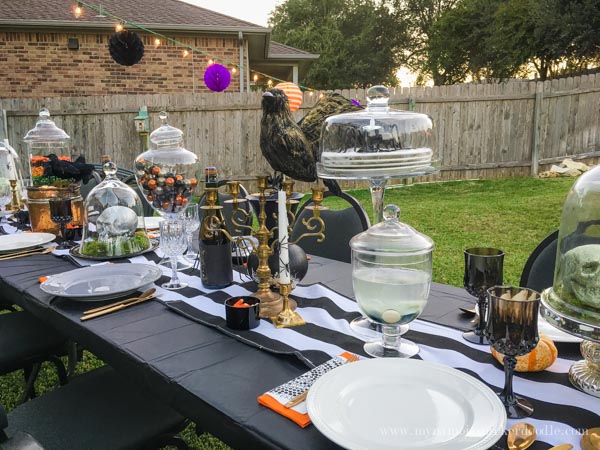 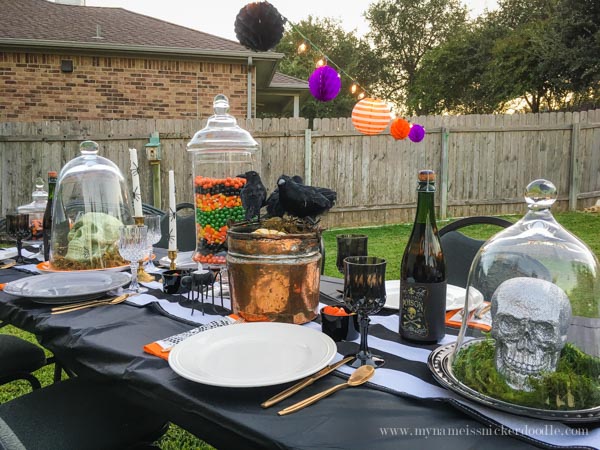 My friend and her sister had white plates and gray ones that were accompanied by gold silverware.  I had plastic black and clear goblets and two very long black and white striped table runners. 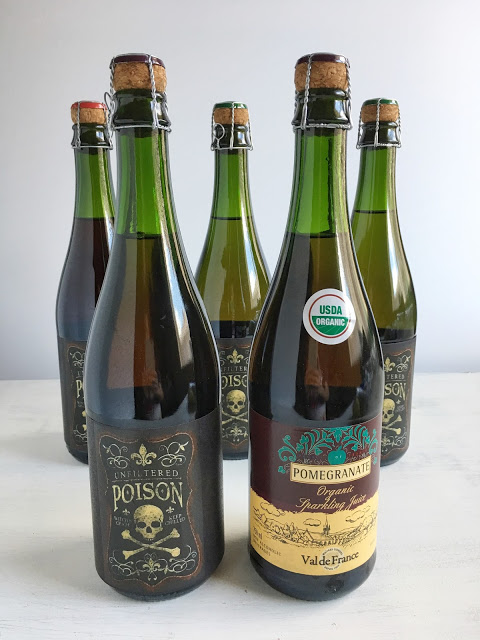 I bought some of my favorite sparkling juice and whipped up some quick
“poison” labels I found on the internet.  Then I just glued them around
the bottle and they were instantly transformed! 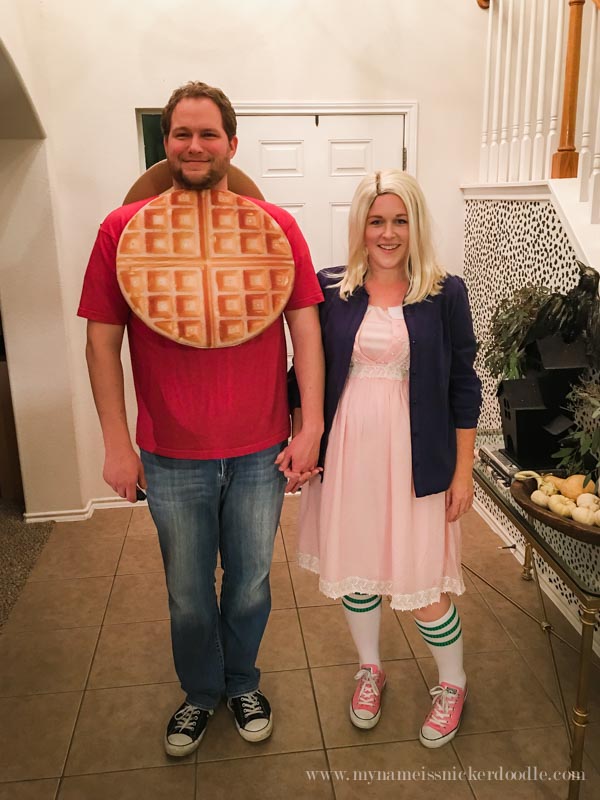 We are huge fans of stranger things and I thought it would be hilarious to dress up as Eleven and Ian be a waffle!  It was just as fun as it looked!  The waffle is from Target and I pulled together my outfit from a hodpodge of places.  The dress is an old bridesmaid dress from a friend, blue shirt/coat from Goodwill, wig from The Halloween Store, socks from Amazon and I already had the shoes. 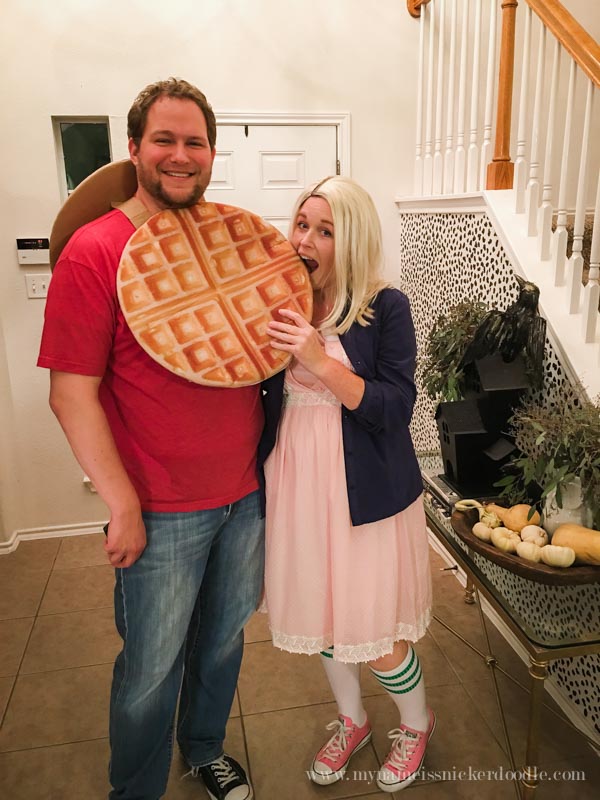 I really didn’t take as many pictures as I thought I did so we pulled some from our friends.  It got darker once the party started so it was absolutely gorgeous at night.
My friend’s husband strung outdoor lights across and the fixed paper lanterns along each strand.  It made for a perfect atmosphere. 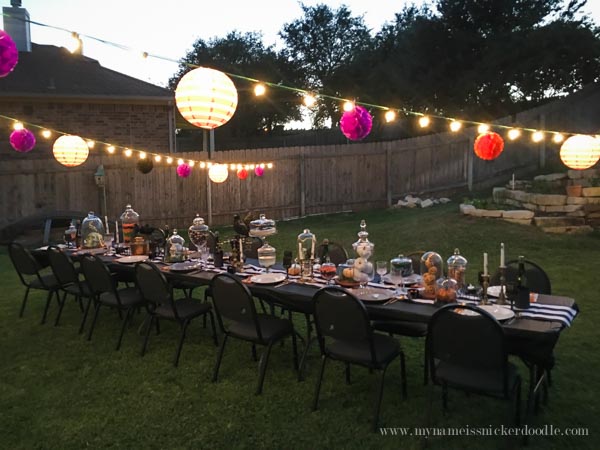 We also had a few flickering battery operated tea candles along the table. 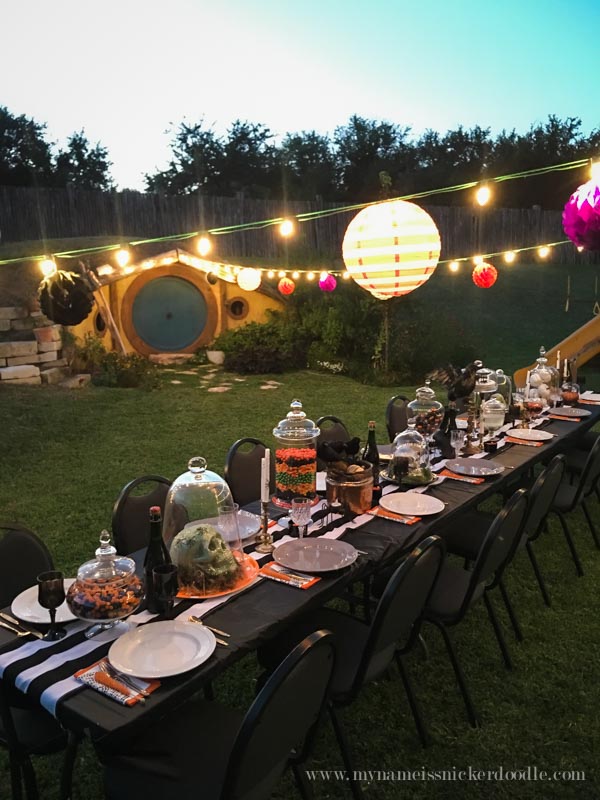 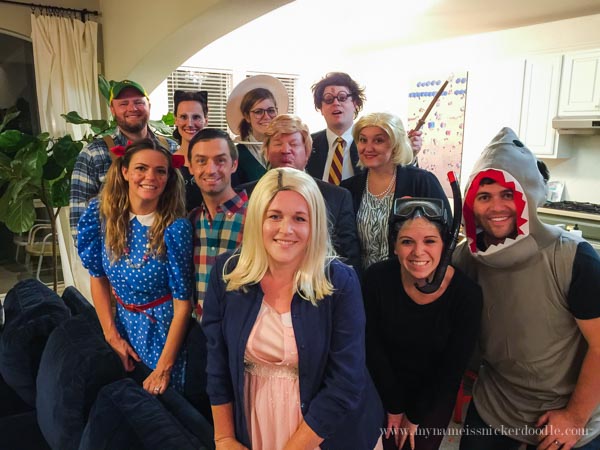 I was excited that everyone dressed up!  We have two little kids, farmer, cat, Moaning Myrtle, Harry Potter, Donald Trump, Hilary Clinton, scuba diver, shark and two friend who weren’t in the picture who dressed as Dead Shot and Harley Quinn. 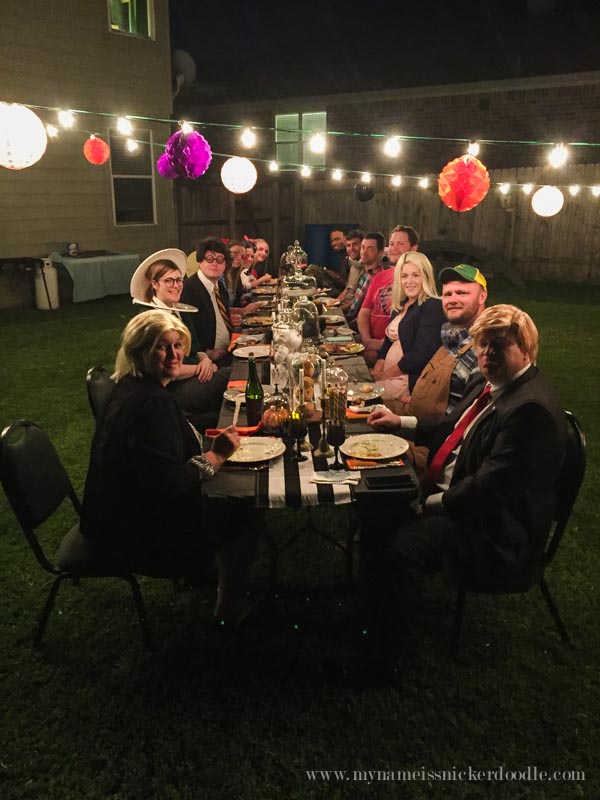 Everyone had a great time eating, chatting and playing games.  Towards the end we fried up some homemade doughnuts (I’ll share the reicpe another time!) and the night was complete. 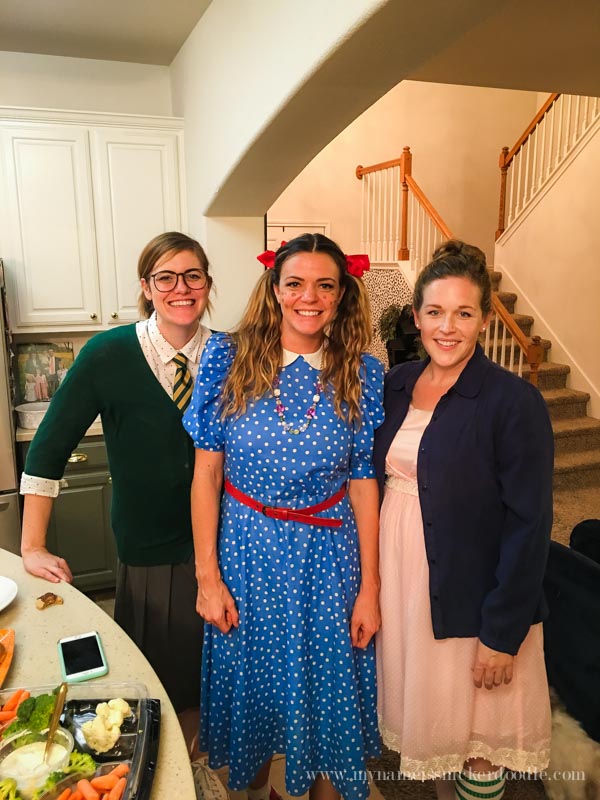 I only ended up wearing my wig for about 20 minutes.  It was too hot and kept getting in my mouth while I was trying to eat!
These two friend sure know how to throw an epic party!  Truly the best!  Thanks girls! 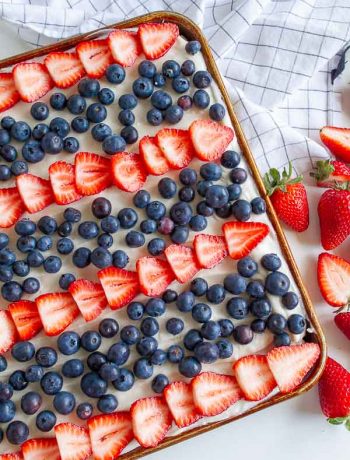 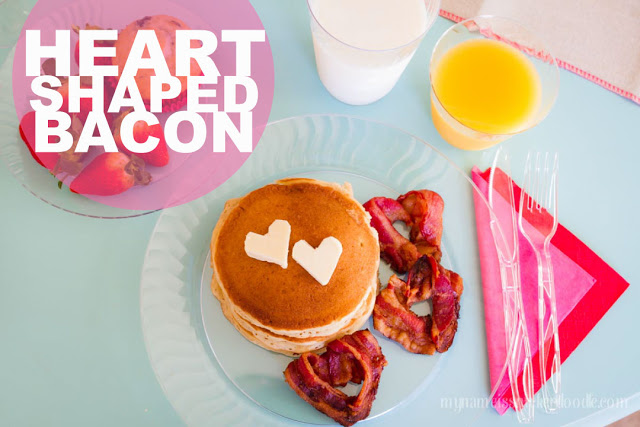 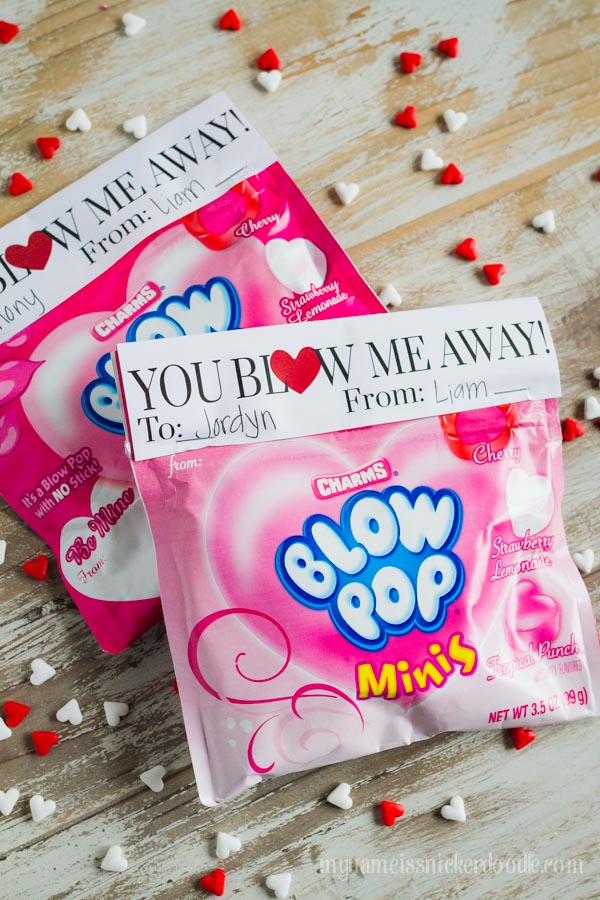 ‘You Blow Me Away’ Version 2 Free Valentine Printable